My Back Pages: Thirty Years Ago in Guitar Player Magazine (November and December 1987)

My Back Pages: Thirty Years Ago in Guitar Player Magazine (November and December 1987) 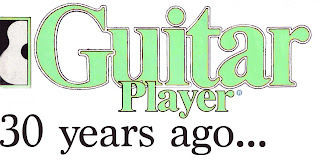 Welcome back to “30 Years Ago”, where I take a close look at the issue of Guitar Player magazine from exactly thirty years prior to discuss what I gleaned from the issue at the time and what I can learn from rereading so many decades later.  I also provide a Spotify playlist that includes music that was mentioned in the month’s issue.

This is a holiday special bonus, comprising highlights from the November, 1987 AND December, 1987 issues. A combination of being very busy, plus finding the issues rather boring in retrospect has led me to combine the two.

Some of the highlights (or lowlights) of November, 1987 include: Anthony Kennedy being nominated to the Supreme Court (after the previous nominee, Douglas Ginsberg, admitted to having once smoked marijuana). Matrimonially, rocker Lenny Kravitz married former Cosby kid Lisa Bonet, blues aficionado Bruce Willis married Demi Moore, and comic actor Phil Hartman married the woman who would eventually murder him.  Some of the highlights (or lowlights) of December, 1987 include: Philadelphia Flyers goaltender Ron Hextall becoming the first netminder to score a goal, and President Reagan and Soviet Premier Gorbachev had a summit meeting in Washington and signed the Intermediate Nuclear Forces treaty, which led to the dismantling of thousands of nuclear weapons.

On a personal level, I was into my senior year of high school and for the holidays I bought what I thought would be my first good guitar: a brand new Epiphone Sheraton II. Remarkably, when I showed up for my next lesson proudly clutching the plush case, my teacher Jim McCarthy was excited to show me HIS holiday present–the Gibson ES-335 that was hanging next to my guitar at the local store! Unfortunately the guitar’s hardware was not very good and it refused to stay in tune–I eventually traded it in for the Stratocaster I still have, but that’s a story for another day. 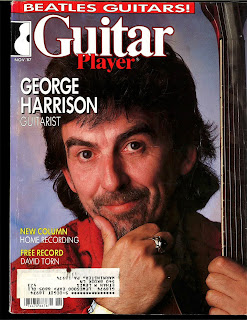 The highlight of the November, 1987 Guitar Player the cover story about “George Harrison, Guitarist”. It’s no coincidence that his solo album Cloud Nine was released that month, and the magazine was very excited to proclaim “The ex-Beatle talks guitar for the first time”.  The article is a mix of discussion of the new record, his understated, but star role in a cable-tv concert honoring Carl Perkins (watch the full video here–it’s a super show!), and of course the Beatles.

The biggest highlight for me at the time was the section on Harrison’s guitars, featuring (cruddy) pictures captioned by the man himself. For your holiday viewing pleasure, here it is: 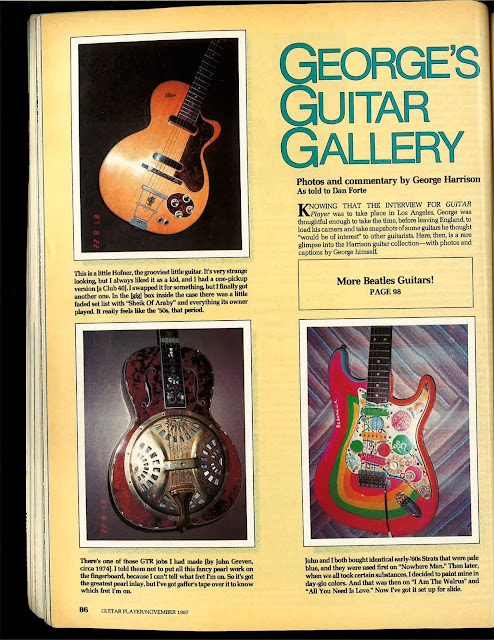 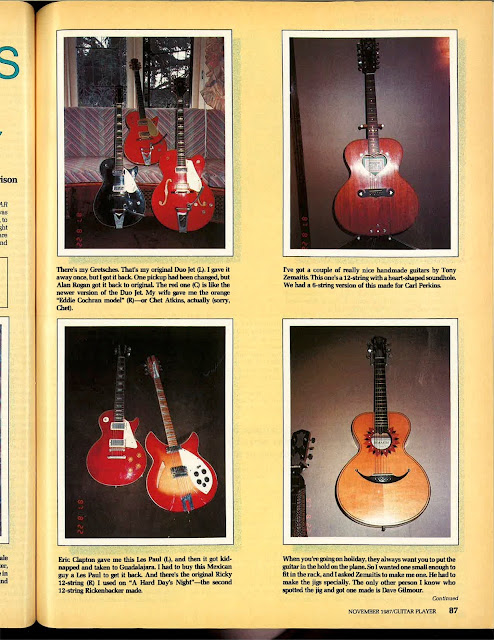 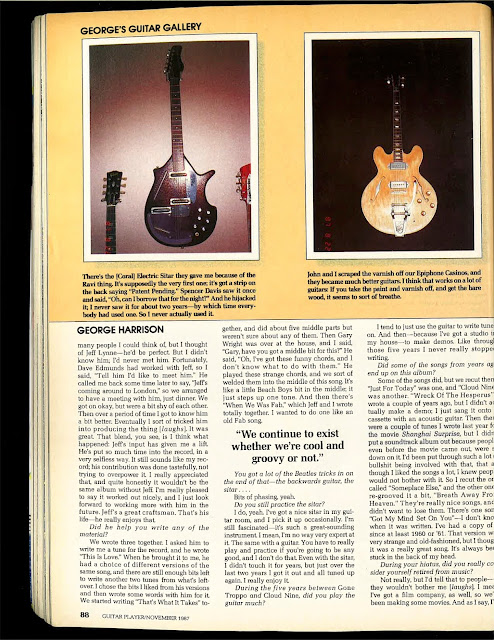 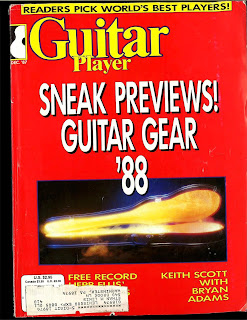 The December, 1987 issue was the annual gear issue. While it IS full of information about new axes, amps and accessories (38 pages, in fact), compared to the wealth of gear information we get now, what stands out is the paucity of details here. It’s the personification of “In my day…” (“In my day, we were lucky to get a black and white picture of a guitar WITHOUT A CAPTION. Lucky I say…”).
The other highlight was the results of Guitar Player‘s annual readers poll. I’ve NEVER been much of one for this kind of thing, because music isn’t a competition. But it IS interesting to see who was considered top of the heap thirty years ago. As an added bonus is the list of the “Gallery of the Greats” who had won a poll category five times and were retired from further competition. I wonder how many guitarists and music fans even recognize some of the names on the list? 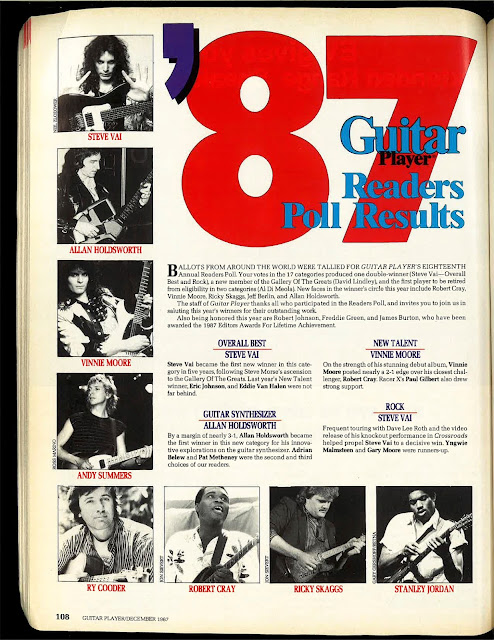 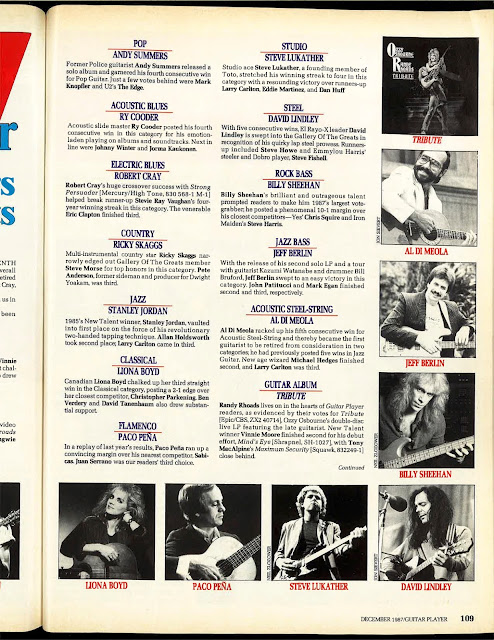 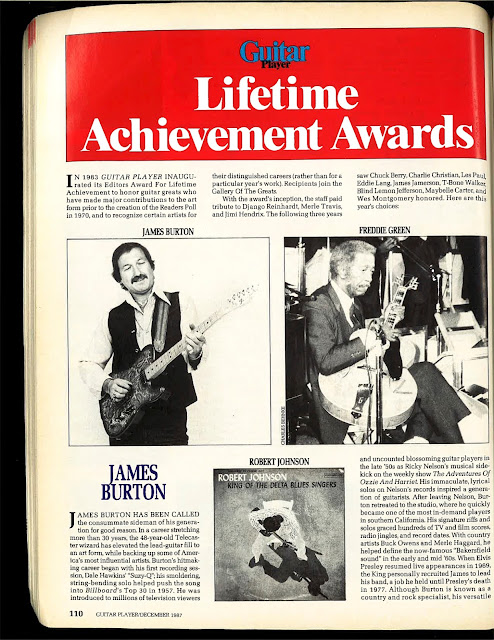 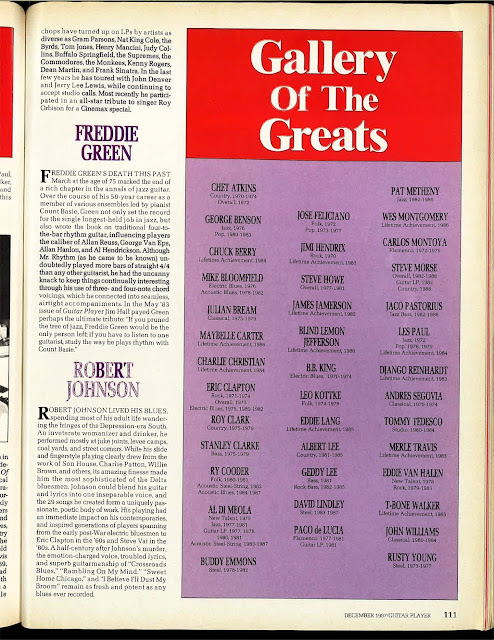